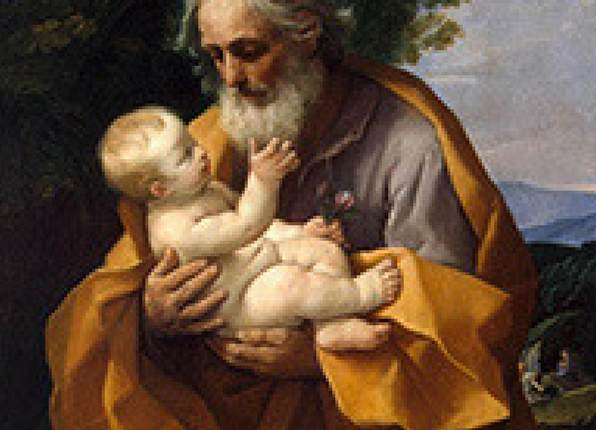 Most of what we know about St. Joseph comes from the first two chapters of the Gospel of St. Matthew as he describes the birth and infancy of Jesus. As the story begins, Mary is engaged to be married to Joseph, but she has become pregnant (as the angel Gabriel told her at the Annunciation). Joseph is about to end the engagement when an angel comes to him in a dream and gives him several pieces of important information:

Joseph’s next dream comes after the visit of the Magi. Remember that the Magi stopped in  Jerusalem to ask directions to the place where Jesus, Mary, and Joseph were staying. The three visitors referred to Mary’s baby as “the newborn king of the Jews” when they were speaking to King Herod. The king thought of himself as king of the Jews, so he wasn’t about to give up his throne to anyone, newborn or not.

After their visit to Jesus in Bethlehem, the three Magi also had a dream in which they were told not to return to King Herod and give him a report on the child. But Herod knew the Magi had been to Bethlehem, so he sent his soldiers there to kill all newborn male babies. At this point Joseph has another dream and the angel gives him more information:

After King Herod died, the angel comes to Joseph in another dream and tells him to take his family back to Israel. But Joseph is also warned that Herod’s son is ruling in his father’s place, so Joseph takes Jesus and Mary to Galilee, in the north, where they will be safe.

Matthew’s Gospel shows how God’s wishes are communicated to Joseph by an angel who comes to him in his dreams. Most of these dreams concern Joseph’s role as protector of Jesus and his mother. Joseph protects Mary by fulfilling his intention to marry her, then protects Mary and Jesus by moving his family to Egypt to escape Herod’s plan to kill Jesus, and then by moving back to northern Israel to be out of sight of the authorities in Jerusalem.

Because he was such a willing and responsible protector of the Holy Family, St. Joseph has been named the Guardian of the Universal Church. On St. Joseph’s Day, ask this responsible saint to help you as you try to carry out your own responsibilities faithfully.

Your email address will not be published. Required fields are marked *

Bring the Gospel to life and bring life to
the Gospel!

This website uses cookies so that we can provide you with the best user experience possible. Cookie information is stored in your browser and performs functions such as recognizing you when you return to our website and helping our team to understand which sections of the website you find most interesting and useful.