“We Sing for Freedom”: Bayard stands against modern-day slavery 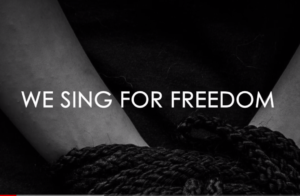 Worcester, MA– John Burland released his newest album, All Are Welcome Here, in March 2019. This collection continues in the tradition of faith that many have come to recognize and love in John’s music, yet fans will notice that John branches out in his creative expression of worship. This new venture led him to Nashville, Tennessee, where he teamed up with producer Stephen Lewieke at Yackland Studio to create a powerful expression of praise and worship. The result is an album of ten faith-filled songs with a message of truth and celebration that is sure to span generations as they proclaim that “all are welcome here in the house of the Lord.”

Included in this album, the song “We Sing for Freedom” was inspired by the life of Saint Josephine Bakhita. Her strong faith carried her through slavery and beyond. The entire journey of her life is a remarkable witness to faith. After finding out about her, John was deeply moved and inspired to write this song. He wanted “We Sing for Freedom” to be an anthem for freedom with a focus on human trafficking and modern-day slavery. This cause is extremely important and cannot be overlooked. The song also draws on Scripture: “It is for freedom that Christ has set us free” (Galatians 5:1).

Distributed by Bayard and the Pflaum Publishing Group, All Are Welcome Here is available on BayardFaithResources.com and Pflaum.com. 10% of the proceeds support CRS’s mission to combat trafficking and human slavery.

The post “We Sing for Freedom”: Bayard stands against modern-day slavery appeared first on Bayard, Inc..

Our sacred priviledge
Comments are closed.