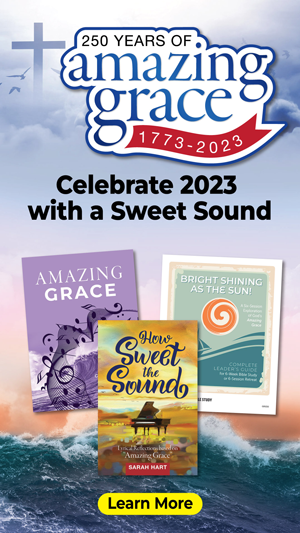 Creative Communications for the Parish commemorates the anniversary of one of the most well-known and beloved hymns in 2023. January 1, marks the 250th anniversary “Amazing Grace,” first sung in a church on January 1, 1773.

Did you know? “Amazing Grace”:

As all can resonate in some way with once being spiritually “lost but now found,” being religiously “blind but now seeing,” “Amazing Grace” is a perfect song and theme to celebrate in 2023. Here are some ways churches can participate using Creative Communications resources, designed specifically for this occasion:

* John Newton, writer of this hymn, was an Anglican clergyman serving in Olney, England, who penned the lyrics from personal experience. An unbeliever as a young adult, Newton served as a sea captain in the Atlantic slave trade. In 1748, a violent storm off the coast of Ireland struck Newton’s ship so severely that he called out to God for mercy. This event marked Newton’s turn toward God, which he called “the hour I first believed.” Eventually leaving sailing behind, Newton then began studying Christian theology and was ordained in the Church of England in 1764. He was a minister in Olney, England, when he wrote “Amazing Grace” in 1772. The song poetically tells what it feels like to be a person far from faith who is brought near to God.

Bring the Gospel to life and bring life to
the Gospel!

This website uses cookies so that we can provide you with the best user experience possible. Cookie information is stored in your browser and performs functions such as recognizing you when you return to our website and helping our team to understand which sections of the website you find most interesting and useful.