Christ Is Our Mystical Bridge

St. Catherine of Siena (1347-1380), a mystic and tertiary of the Dominican Order, was canonized in 1461 and proclaimed a doctor of the Church in 1970. Her Dialogue, dictated during a state of ecstasy, teaches through a conversation between God and a human soul.

The “voice of God” in these excerpts from Catherine’s experience encourages us to consider our own journey across the Christ-Bridge to everlasting life. 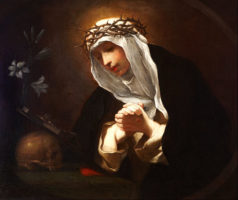 I have made a Bridge of my Word, of my only-begotten Son, and this is the truth. I have given you the Bridge of my Son, in order that, passing across the flood (of the tempestuous sea of this life), you may not be drowned.

Look at the Bridge of my Son, and see the greatness thereof. The height of the Divinity, humbled to the earth, and joined with your humanity, made the Bridge in order that man might come to his true happiness with the angels.

Climb the steps of the Bridge
This Bridge has three steps, of which two were made with the wood of the cross, and the third still retains the great bitterness he tasted when he was given gall and vinegar to drink. In these three steps you will recognize three states of the soul.

The feet of the soul are the first step, for the feet carry the body as the affection carries the soul.

These pierced feet are steps by which you can arrive at his side, which manifests to you the secret of his heart. The soul, gazing into that open heart with the eye of the intellect, finds it consumed with ineffable love.

Passing the second step, the soul reaches out to the third step—that is—to the mouth, where it finds peace from the war that it has been waging with sin.

On the first step, then, lifting its feet from the affections of the earth, the soul strips itself of vice; on the second it is filled with love and virtue; and on the third it tastes peace.

Climbing past the first and the second steps, you may reach the last, which is lifted on high so that the water, running beneath, may not touch it.

Cross in protection and mercy
This Bridge is built of stones so that rain may not impede the traveler. They are the stones of true and sincere virtues. These stones were not built into the walls before the passion of my Son—he moistened the mortar for its building with his blood.

He has built a wall of the virtues, planting them as living stones, so that every believer may walk speedily, sheltered by the mercy which descended from heaven in the incarnation of my Son. So you see that the Bridge is walled and roofed with mercy.

The pilgrim, having passed the Bridge, arrives at the door which is part of the Bridge, at which all must enter, wherefore he says: “I am the Way, the Truth, and the Life; he who follows me does not walk in darkness, but in light.”

For those who cross by the Bridge, being still in the darkness of the body, find light, and being mortal, find immortal life, tasting, through love, the light of eternal truth which promises refreshment.

The post Christ Is Our Mystical Bridge appeared first on Living With Christ.

The post Christ Is Our Mystical Bridge appeared first on Bayard, Inc..