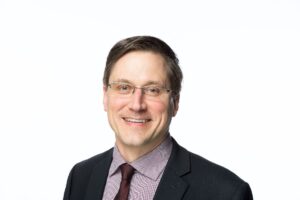 Worcester, MA, July 2, 2019 — Hugues de Foucauld, CEO of Bayard, Inc., is pleased to announce David Dziena as the new publisher of Pflaum Publishing Group, where David has been serving as Editorial Director since 2015.

Inside Bayard Inc., David now directs the activities of Pflaum Publishing Group, including editorial, marketing, sales, production, and distribution. David will continue to be responsible for all catechetical products for children and youth for the company, including the Pflaum Gospel Weeklies, sacramental preparation programs, and the Good News student planners. He will continue to work closely with the executive management committee.

David’s work in catechetical ministry began in 1993 when he served as one of the first lay assistant volunteers for the Capuchin Franciscan Volunteer Corps in Garrison, New York. He then went on to serve as director of religious education, youth ministry director, catechist formation presenter, and Confirmation coordinator for various parishes in the Archdiocese of New York.

In 1997, David began his career in Catholic publishing at Silver Burdett Ginn Religion/Pearson Education. After the acquisition of SBGR by RCL Benziger in 2007, David was part of the RCLB team until joining Our Sunday Visitor in 2008. At OSV, he first served as acquisitions editor and parish projects manager for the Publishing Division, then as Executive Editor for the Curriculum Division, where he played a key role in the development of the Alive in Christ catechetical series. David is the co-author of the Catholic Prayer Book for the Separated and Divorced (OSV); Our Catholic Family: Activities, Conversations, and Prayer for Sharing Faith at Home (23rd Publications); and the general editor for Singing Our Faith, Second Edition: Leader’s and Catechist’s Manual (GIA).

David graduated from Iona College in New Rochelle, NY with a B.A. in Philosophy with a minor in Fine Arts and Religious Studies. He also received an M.A. in Pastoral Theology from St. Joseph’s College in Standish, ME.

David lives in Massachusetts with his wife, Gloria, and has four children. He works from Bayard’s editorial hub at Assumption College in Worcester, MA, where you may reach him by email at David.Dziena@Bayard-Inc.com or by phone at 860-437-3012, ext. 4895.

Bayard, a ministry of the congregation of the Augustinians of the Assumption, is an international publishing and communications group with a presence in 41 countries. In North America, through its main divisions — The Pflaum Publishing Group, Twenty-Third Publications and Creative Communications for the Parish — Bayard supports the mission of the church to communicate the Gospel message through books, periodicals, faith formation programs, as well as liturgical and devotional worship companions. Bayard’s brands include the Pflaum Gospel Weeklies, Today’s Catholic Teacher, Catechist magazine, Catholic Digest, Living Faith, Living Faith Kids, La Fe Viva, Living with Christ, Exploring the Sunday Readings.